Rugby players across Shropshire have a new opportunity to help potential players across the world – just by getting rid of their old boots and trainers.

With preseason training just getting into full swing, Shropshire-based sports recruitment agency Muddy Boots Sports has linked up with The Barefoot Project to help rugby players in some of the poorer parts of the world.

The plan is to put ‘Muddy Boots onto Barefeet’, according to Steve Charmley, founder of Muddy Boot Sports.

Steve, a former player, explained how the scheme works.

“We’ve set up collection points at rugby clubs across Shropshire where players of all ages can donate old boots or trainers. Even if you’re not changing your boots for the new season I’m sure everyone has at least one old pair tucked away in the back of a wardrobe – let’s do something positive with them!” he said.

Steve Charmley kicks off the initiative at Oswestry Rugby Club

“The boots will then be sorted and packaged and sent to some of our less-fortunate sporting friends, delivered by a team of qualified coaches, who will also take part in training sessions and coaching clinics.

“Already, Barefoot has donated kit including boots or trainers to communities in Fiji, Nepal, Kenya and South Africa. It would be great to think that boots from rugby clubs in Shropshire could help inspire a new generation of players who may not normally have access to the right equipment,” he added.

“I’m really pleased to have linked up with this worthwhile project and to get this great opportunity to put something back into a sport that has given me so much enjoyment over the years. Collection points are now in place so please start donating.” 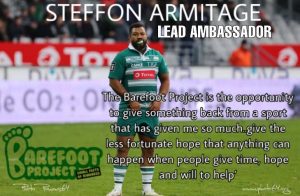 The Barefoot Project has a number of high-profile ambassadors including former England star Steffon Armitage.

The containers have been supplied by Shropshire Council’s Recycling and Waste partner Veolia whose communications manager Tim Walters said: “We are delighted to support this project, it’s a great way of recycling your old boots and trainers in a way that will make a real difference. Any boots or trainers will be gratefully received, even moulded boots which are great for hard surfaces.”

It is hoped to roll the initiative out to more clubs across the wider rugby areas, any interested clubs can contact us to discuss further. info@muddybootsports.com